Synopsis:
Susan (Amy Adams), an art gallery owner, receives a manuscript from her ex-husband (Jake Gyllenhaal) and asked for her opinion on the story which follows a family’s holiday turning violent.

Nocturnal Animals is an unsettling blur of beauty and violence, where gorgeous people are subject to horrible acts of psychological and physical violence. Director Tom Ford’s career in fashion design comes crashing into a feature that is stunning; where every frame seeps with a luscious understanding of visual excess and outer exquisiteness that is used to provoke irony, but also simply, to craft a film that is criminally alluring. When compared to Nocturnal Animals’ thematic concerns with the ugly and what drives people to commit heinous, unforgiveable acts, the film strikes up an intelligent, contrasting balance that works as proof in the darkness that lurks beneath even the most attractive of surfaces. 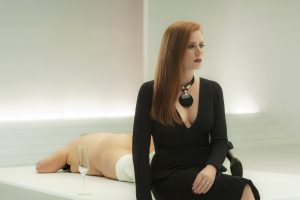 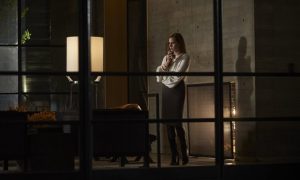 Nocturnal Animals is a story within a story, where the events unfolding in the novel are where the majority of your interest will lie. The journey is brutal and unforgiving featuring the horrors that work as a contrast to Susan’s apparently outwardly beautiful life. However, the reading of the novel forces her to confront truths she’d rather bury and moments from her past she’d rather ignore. Nocturnal Animals is home to moments that are heart-breaking and difficult to watch, but it’s impossible to tear your eyes from the screen because the scenes pull you in like a chokehold. Honestly, all praise has to go to the cast in these moments, because they are astounding. Aaron Taylor Johnson gives the performance of his career, proving that he is more than just a pretty face fit for romantic comedies, Jack Gyllenhaal gives an expectedly brilliant performance as a man pushed to the edge with Michael Shannon as the ice cold, takes-no-shit Texan sheriff. Nocturnal Animals will certainly not be short of Oscar nominations when Awards season comes around and, rightly so, because the cast is overwhelmingly brilliant.

The idea of beauty and horror meeting in the middle and creating a stunning, but horrific tale is nothing new. We recently saw Nicolas Winding Refn tackle similar ideas with The Neon Demon, but where Refn demonstrated his views with a story that honestly had very little to say except “beautiful people can be mean, too”, Ford opts for something with a little more depth. As well as its obvious preoccupation with the beautiful and the horrid, Nocturnal Animals is concerned with the changes that come with age, revenge, the difficulties of relationships, the struggles of creativity and the power of storytelling to raise questions about yourself, your life and the choices that have lead you to the place you are currently. It’s a complex, but never convoluted story that explores harsh realities and regrets in a film that defies definition with its seamless blending of southern noir, thriller, comedy and melodrama. This is a masterclass in meta film-making where careful script-writing and editing craft a film that is multiply layered, earning the right to be re-watched so you can truly get a grasp on the film’s technical and thematical intricacies. 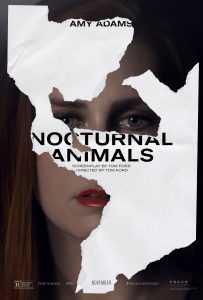 There are a few moments that are painfully obvious; Susan stands in front of a painting that reads “revenge” in case we haven’t already grasped her ex-husband’s clear intentions and the paralleled scenes of Susan’s life and the events in the novel could have done without the blatant overlapping of frames to force-feed us the similarities. Nocturnal Animals should have adopted for a more subtle approach that would have shown a confidence in its audience to draw the necessary conclusions themselves, rather than holding our hands and guiding us through the moments of meticulous mirroring.

Nocturnal Animals is a classy and stylish tale that is laced with striking violence. The combination of a gripping storyline, gorgeous visuals and a fantastic cast makes it an eye-opening and excellent feature from Tom Ford, proving that what lies beneath tends to be darker than you’d expect.