No Shortage of Ghouls in Creepy Cold Moon Trailer 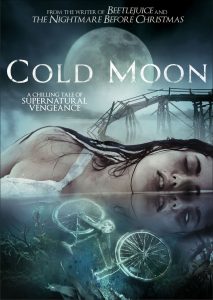 Based on the novel Cold Moon Over Babylon by the late Michael McDowell – author of Beetlejuice and The Nightmare Before Christmas – ghostly revenger Cold Moon is coming to cinemas and VOD in October. The film features in its cast Christopher Lloyd (who seems to have become very busy on the horror front of late) and none other than Tommy Wiseau, the auteur behind 2003 cult phenomenon The Room and the subject of James Franco’s upcoming The Disaster Artist. Along with Cold Moon’s release announcement comes a new poster (right) and trailer (below).

Synopsis:
In a sleepy southern town, the Larkin family suffers a terrible tragedy. Now the Larkin’s are about to endure another: Traffic lights blink an eerie warning, a ghostly visage prowls in the streets, and graves erupt from the local cemetery in an implacable march of terror . . . And beneath the murky surface of the river, a shifting, almost human shape slowly takes form to seek a terrible vengeance.

Griff Furst directed Cold Moon, which will be in US cinemas and VOD on October 6th, from Uncork’d Entertainment.