No One Gets Out in the Poster for Pledge

A brand new poster has been unveiled for the college-set horror-comedy Pledge and it promises that no one will get out. 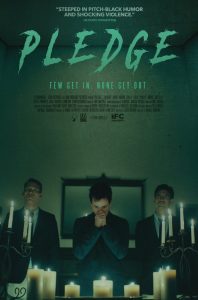 The film follows a group of nerdy who students who think their prayers have been answered when they’re invited to the part of their lives. However, things take a dark and drastic turn. Check out the detailed synopsis below:
“Three nerdy college freshmen, who have been rejected and ridiculed by just about every fraternity on campus, are invited to an off-campus to a party at a secluded mansion. There they are treated like princes by the resident brothers and the party is everything they dreamed college would be—beautiful women, drinking, and most importantly, a cool group of guys willing to accept them as one of their own. When the friends are presented with an opportunity to pledge the elite social club, they accept without hesitation. However, as the gruesome, dehumanizing hazing progresses, a more sinister picture of the club emerges.”

Pledge comes from director Daniel Robbins and he directs a script written by himself and Mark Rapaport.

If you want to know more about the film, then check out the trailer below to see the naughty antics the students get up to at the 48-hour party. Yep, that’s 2 whole days of non-stop partying. Rather them than me.