NO ONE GETS OUT ALIVE: Book Review 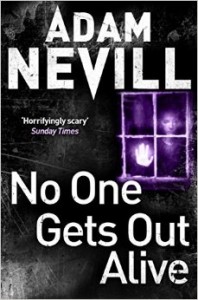 ‘And what will I do if I turn the light on and someone is standing there?’

In No One Gets Out, Alive Adam Nevill explores the plight of a lonely desperate young woman, she takes a room at 82 Edgehill Road in Birmingham because it’s cheap as chips at 40 quid a week. She’s got a temp job handing out samples at the bullring shopping centre and it’s time for a fresh start. She’s got nothing else, there’s no one to help her and against her better judgement it’s time for the first night in her new home.

The first chapter catapults the reader straight into an atmosphere fraught with tension, noises, voices, creaking floorboards, scratching, and the mattress at her feet dipping as if the sudden weight of someone sitting.

No One Gets Out Alive is a hell of a lot more than a haunted house story, there’s a small character base which keeps things tight and personnel. The landlord ‘Knacker’ McGuire with his intimidating cousin Fergal hasten plans to return 82 Edgehill Road to its former glory after an enforced hiatus. They bring Intimidation, both scary and manipulative, she’s got lots of reasons to think twice about ever having set foot in this wretched place.

Stephanie Booth soon realises that she’s made the biggest mistake of her life, this house has an evil history full of malevolence and anguish. Soon enough escape is but a dream in a world of nightmares. There’s not just the supernatural to be scared of, there’s the living, and unconsciousness won’t save you.

This story is a long one at over 600 pages but it certainly didn’t feel like it. Adam Nevill avoids slow burning horror by jumping straight in at the deep end and keeping your nerves shredded as the tension just doesn’t let up for two thirds of the story. The house itself and the horrors within almost take on the role of a terrifying character, a horrific environment that is completely gripping along with the effect it all has on Stephanie.

Two thirds of the way through, the author rather cruelly brakes sharply after keeping you dangling over the precipice with no respite for most of the story. I was left feeling like I was starting a new story and a few curses passed my lips. It left me thinking whether it would have been better just ending it there and that continued for some time as I started to skip through, getting bored. The story did come back to life eventually and the nerves strung out once again with a taught satisfactory ending.

So in conclusion I really enjoyed No One Gets Out Alive, so much so that I was annoyed with the time lapse in the story that destroyed the apprehension. But on reflection that’s probably a positive reaction regarding the vast majority and the nail biting tension contained within.

So this one is definitely my favourite so far from Adam Nevill, an intensely dark and dirty atmosphere that will play on your mind at night, listening to the sounds of your house, that creaking floorboard, a whisper. There is no way out and No One Gets Out Alive.