The July 2017 passing of George A. Romero left a hole in the heart of the horror community. Romero’s death roughly coincided with the St. Martin’s Press publication of Nights of the Living Dead, an anthology of original tales inspired by the zombie universe that the beloved horror master created. The compilation was intended to be a testimonial to the vision of a living legend. Sadly, the tribute turned out to be a memorial. The book is a fine and fitting send-off to Romero, who served as co-editor. He also contributed a story and wrote a fabulous introduction for the collection.

The intro delves into his distaste for the word “zombie,” preferring the word “ghoul,” in regard to the lumbering creatures he immortalised onscreen. He also indicates that the casting of African-American Duane Jones in “Night of the Living Dead” wasn’t meant as social commentary or to give the film gravitas. Jones won the role on merit alone.

Romero’s co-editor, Jonathan Maberry, also wrote a wonderful introduction for the book, fondly recalling his first time seeing “Night of the Living Dead” when he was ten years old: “The monsters were mysterious. They were enigmatic (a word I didn’t know back then.) That was part of what made them so damn scary. No one in the story knew what was going on, and they never found out. I couldn’t remember seeing a single other movie where the entire cast of characters was clueless and, as a result, helpless because they had no information with which to form a plan.”

The tales in the anthology go far beyond the framework of the 1968 movie, looking at the zombies in a multitude of ways, including from their point of view. As with any collection, the yarns that strike a chord reflect the reader’s subjectivity. The overall quality of the anthology is excellent, due in large to its stellar first five stories.

Provocateur par excellence John Skipp supplies one of the especially memorable narratives, “Jimmy Jay Baxter’s Last, Best Day on Earth.” The politically charged satire is pure Skipp; audacious and outlandish. Consider the gonzo first line: “I just gotta say: the end of the world is what you make it. It all depends on your attitude and perspective.” While the story’s ideological stance may not appeal to some readers, the writing itself demands attention.

In contrast to Skipp’s over-the-top offering, “In That Quiet Earth” by Mike Carey is elegiac and poetically haunting. Carey’s title is taken from a passage in Emily’s Bronte’s melancholy romance Wuthering Heights, and serves the plot most fittingly. A grieving husband takes an unorthodox route to reunite with his spouse. It’s a present-day loose approximation of the theme of Heathcliff and Cathy’s classic love affair–for zombie fans.

While romance is a factor in Carey’s story, sex sans consent is the focus of “A Dead Girl Name Sue” by Craig E. Engler. As if ripped from today’s headlines, this revenge tale confronts the subject of rape. The justifiable comeuppance is sadistic and superbly modulated: “The two men dragged the body bag into the cell, snagging in on the doorframe for a second before wresting it free. The whole time the bag shifted around like it was full of huge, drunk bumblebees trying to get out.”

The protagonist in Jay Bonansinga’s “Fast Entry” is a substance abusing neurotic psychic who works for a government agency. Her ability to engage/empathize renders an affinity with her targeted subjects, something that is particularly dicey when dealing with the walking dead: “She stares into the frosted portals of the creature’s eyes, seeing nothing but urgent hunger.” The jolting tale shows that addictions can mutate in terrifying ways. 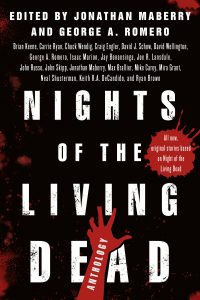 As the first yarn in the book, “Dead Man’s Curve” by Joe R. Lansdale had to come on strong. And it does. A drag race turns into a gauntlet of gore. One of the characters is named Duane which, one may assume, is an homage to actor Duane Jones. Lansdale’s prose is downhome and accessible even when describing zombies: “They stretched across the road in a thin line, seemed drunk the way they staggered, and that was all I could tell in that moment when they suddenly appeared, dipped in moonlight as pale as Communion wafers.”

Nights of the Living Dead is a splendid reminder of George A. Romero’s grand legacy. The writers who participated in this compilation display their gratitude to him through their unique and creative takes on his imprint.