Synopsis:
A mental patient escapes from a psychiatric ward. Haunted by flashbacks and nightmares, he is driven to murder as he stalks his former family. 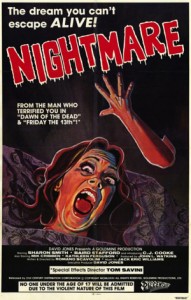 When it comes to the slasher genre, finding an entry that stands out among the rest isn’t always easy. There have been several titles released over the decades, and some can seem formulaic and predictable. Very seldom do you have one that can stands apart from the herd that deserves massive amounts of praise and admiration. Romano Savolini’s Nightmare, released in 1981, is one of them. One of the infamous ‘Video Nasties’ banned outright in the United Kingdom upon release, it’s since received a massive cult following. Deservedly so, this is one of the most unique slasher films ever made.

It’s almost impossible to watch this and not be reminded of Maniac, released the previous year in 1980, as they share certain similarities such as settings and similar effects. Much like Lustig’s film, a great deal of emphasis is placed on the tormented mind of our antagonist. We’re given a first hand look into the mind of a killer, and the environment that created him. There’s still a good amount of stylistic killings, blood, and carnage. Although these a re staples essential to a film of this nature, they don’t dominate the running time. 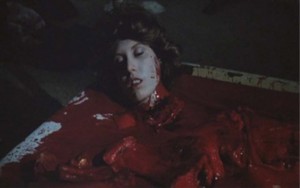 Nightmare is the story of George Tatum, a man who walks a thin line; possessed by the demons of his tortured mind. He has a very interesting backstory that’s gradually revealed to the audience as the film progresses. He’s not someone we can identify with, nor is he someone we’re fascinated by; he’s simply a product of failed rehabilitation.  For the lack of a better term, Tatum’s a killer, plain and simple, who’s driven to impulse by reoccurring nightmares and flashbacks.

This is what establishes Nightmare as a ‘psychological’ slasher; it creates a villain that’s not a mindless assailant, and isn’t indiscriminately hacking people apart for no reason. He’s a product of his environment, and a system that failed to readjust him as a productive member of society. In short, he’s institutionalised; someone who cannot deal with the outside world away from the confines of imprisonment. 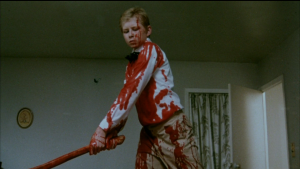 The culmination of these events leads him to stalk his old family, who has degenerated into the typical dysfunctional unit. Most importantly, this part of the story focuses a great deal of attention on Tatum’s estranged son CJ. He’s your quintessential ‘boy who cries wolf’ playing pranks on his family members, which involve faked murder and jump scares. When Tatum arrives the real terror begins.

This all leads to another aspect that works in this film’s favour. Throughout the story we’re forced to wonder what’s a real occurrence, or simply a prank by CJ, or a delusion resting somewhere in Tatum’s subconscious. Although they share very little time together on screen, in the end, father and son aren’t so different after all. The whole dynamic with the family is an interesting one, we know Tatum left, but it’s never established why. As the viewing audience, we’re left to draw our own conclusions. As more and more of Tatum’s backstory is revealed, we can safely assume it wasn’t under the best of circumstances. It’s what we don’t know that spark our interest and curiosity, it’s what we’re shown that keep us entertained, and make us cringe with every drop of blood that gets spilled. Nightmare is combination of everything you’d expect from a slasher film, and even a few things you might not be anticipating. Without a doubt, this is a diamond in the rough.