Synopsis:
Freddy’s back, to stake his claim on the last of the Elm Street children; the only living children from the original vigilante gang that killed him. Kristen Parker (Patricia Arquette) has been having terrible nightmares, and when Krueger slashes her wrists, she’s placed in a mental hospital with the rest of the Elm St kids. Where they are powerless against being forced to sleep. Nancy Thompson (Heather Langenkamp) returns, and she’s currently working on “ground-breaking research in dreams.” She quickly bonds with the teenagers, and also the other Doctors. The last teens of Elm Street work with Nancy to get control over their nightmares, and use their dream powers against Freddy, before there are no Elm Street kids left. 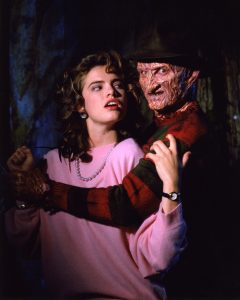 This was the film that got Freddy to the height of his fandom, where he first started making his own puns before the fantastical murders. In this film we go back to basics, Wes Craven was brought back on board, and the script works loosely from his. Though his version was even darker and crueller. However, New Line Cinema wanted to keep their cash flowing, and so they hired another writer to lighten the mood a little.

The story throughout is very tightly written, as is the dialogue. Nancy Thompson is back to finally take Freddy down for good, the only problem is, he’s strong. He’s never been so strong, feeding on the souls of his victims is making him a true dream demon. Nancy has been taking an experimental drug to stop Freddy’s nightmares for years. However, Kristen has the ability to “bring people into her dreams”, and also acrobatic skills. This is the start of Nancy facing Freddy again, teaching the teenagers to use the dreams to be whoever they want to be, and create whatever skills they need; be that strength, fighting, magic, each teenager’s abilities are utilized. Freddy is not the type of killer to go down without a fight though.

In this film, Freddy creates some of his most famous quotes, and we see some of his most infamous death scenes. This was the film that propelled Freddy Krueger into popular culture. This film was so popular on VHS that the next Elm St movie, ‘Dream Master’, was given a bigger budget, a huge opening weekend too, and all because of this film. The first is a classic, but the sequel nearly buried Freddy again. This was the film that saw him take his proper place among the horror bogeymen.

We learn more about Krueger’s background. His mother, a nun, was raped by over a hundred maniacs, while accidentally locked in a mental asylum with them over the weekend. Amanda Krueger advises Detective Thompson (John Saxon, who also returns) to bury Kruger’s bones in hallowed ground.

With a great script, a great group of actors and a great killer (who can act impulsively, and throw out one liners in the shape of Robert Englund) this film really shines. Apart from the original, this is perhaps second to the original in brilliance. It’s a joy to see Krueger back in his gothic wonderland, where dead teenagers fill a room, hanging from nooses, and huge monstrous heads try to eat pretty young girls alive. The ideas flow in this movie and, as an audience, we are drawn back into the horror of falling asleep. This Freddy really plays on our worst fears, and with a bigger budget and some stand out acting, it’s scary to go to Elm Street again.

Patricia Arquette works wonders with her character, especially taking into consideration her age. Her and Heather Langenkamp really bounce off each other in their scenes. Though, this Nancy is much cooler headed than in the original (a complaint Heather herself had with the director, Chuck Dixon) though she gets her moments to shine. The teenagers are all great in their own different and unique ways. The teens are all very likeable, and that’s one of the most important factors in any film – that you can like and relate to the characters. The fantasy element is pushed to the forefront and the dreams are spectacular in their horror. The film has a very dark tone to it, but also a very sweet tone, as these characters’ care about each other and it shows. This is easily one of, if not, the most strongest slasher sequels.