Much beloved, sometimes scorned, but mostly a traditional Christmas treat, Tim Burton’s The Nightmare Before Christmas has become an oversize hoodie and arm tattoo staple of the ‘spooky-cute’ crowd. Still popular after 24 years, Disney has decided to further expand on the series with not one, but TWO, comic adaptations in the works.

First up is a comic adaptation of the very cute Disney short, Nightmare Before Christmas as Told by Emoji. It’s exactly what it sounds like. Last year, Disney Online released a four minute short which retold the classic story of Jack, Sally, and all your favourites, with cartoon emojis. The entire story is contained in a “smartphone” with the other holidays living in other smartphones, which was surprisingly, very clever. Thanks to its success, Joe Books will be releasing a cina-comic of the short which is essentially a screen-shot adaptation of the video. The comic is expected to be out this September and only about a 64 pages long. Coming out alongside it will be Zootopia as Told by Emojis follower a week later by Beauty and the Beast as Told by Emojis. A Little Mermaid adaptation is also in the works for March 2018.

While you wait for the comic, check out the original short below:

Speaking of 2018, a comic sequel has also been announced for Nightmare Before Christmas and will focus not on an older Jack, but Jack’s ghost dog, Zero. The work will also forgo traditional American art work and will be drawn in that hot new Japanese comic style known as manga! Trust me, it’s gonna look good. Handled by the same studio that did the Beauty and the Beast manga, Nightmare Before Christmas: Zero’s Journey will feature writing by DJ Milky (who also wrote the Courtney Love manga Princess Ai, yeah, you heard me) and art by the very talented Studio Dice. 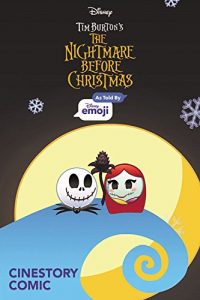 The entire series will be handled by manga powerhouse TokyoPop who will be releasing each issue in full colour before collecting them in all in both a graphic novel format and the smaller, black-and-white pocket size. The story will have Zero trying to find his way out of Christmas Town, though the why and how he got there has not been revealed. Zero’s Journey is TokyoPop’s second manga take on the Nightmare Before Christmas franchise with the first being a straight adaptation of the movie. Look for the long awaited sequel in Spring 2018!