Nightbreed TV Series in the Works at Morgan Creek 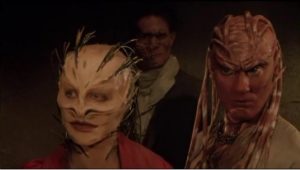 Clive Barker has helped put together a pitch for a Nightbreed TV series, which will retell the story he previously brought to the screen with his 1990 film.

The news comes with the announcement that Morgan Creek Productions is changing its name to Morgan Creek Entertainment Group as the company makes a push towards television and digital. They are now looking to exploit their library of film titles to produce multiple platform content, and Nightbreed is one looking set to take the leap from film to TV.

Based on Barker’s 1988 novel Cabal, 1990’s Nightbreed told of a young man who stumbles across a subterranean society of monsters, freaks and mutants, who keep themselves hidden from humans to avoid inevitable persecution. It starred Craig Sheffer, Anne Bobby and none other than David Cronenberg.

Morgan Creek has been keen to stress that getting the blessing of the original creators for any potential reboots is an absolute priority. Exciting times could well be ahead.