Dracula and Frankenstein’s monster battling it out on the streets of modern day New York City? You’ll be hard pressed to find another monster fest like this one. Night Things: Dracula vs. Frankenstein is the follow up to author Terry M. West’s 2015 release Monsters and the Magic Now which introduced readers to a barrage of legendary creatures & monsters coexisting in the gritty streets of New York City.

In the mythos created here, Dracula rescues Frankenstein’s Monster from an arctic cave and their tremulous relationship spans centuries across the globe leading up to present day New York City where Johnny Stucke (the Monster) is now a successful crime boss running the city. With a booming zombie porn business on the side, Stucke works hand in hand with humans and monsters alike. Dracula however plans to wipe out the human race and is assembling an underground army of Night Things to take out his one-time brother now rival Johnny Stucke along with Stucke’s gang of misfit creatures and humans. 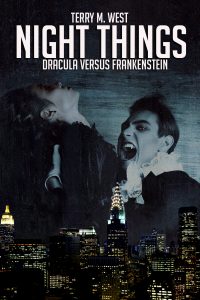 As we watch the once strong alliance between Dracula and Frankenstein’s monster crumble, we’re introduced to a bevy of minor characters taken from every B-Movie and dark folklore tale known from mummies, witches, ghosts, zombies, werewolves, vampires and even the Jersey Devil.

Night Things won’t disappoint. It’s pure fun for those of us whose love of monsters from legend and the screen runs deep. Does it terrify? Not really. Does it provoke nightmares? Not unless your fear factor runs on the mild side. What it is is a nice mix of thrills and classic monsters but more importantly an underlying story of overcoming inner demons, the importance of family, fighting discrimination, and coexisting with the ‘monsters’ of our society.