NIGHT OF SOMETHING STRANGE: Film Review

Synopsis:
Teenage friends out for beach week get unexpectedly detoured to a isolated motel where a deadly STD virus now runs rampant, turning those infected into the living dead. 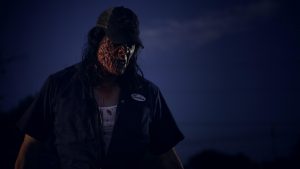 When a film opens with a janitor – working the graveyard shift – entering a morgue and having his wicked way with one of the stiffs, you get the impression the film at hand isn’t going to be subtle. When the next scene depicts the same janitor – now a zombie with a STD – urinating on a stuffed animal before proceeding to rape his own mother, you’ll know right away whether this is a movie for you. Night of Something Strange is directed by Jonathan Straiton and it is unhinged insanity from the get-go.

On paper, it’s easy to mistake Night of Something Strange as just another teenager in peril movie. The story follows a group of obnoxious high school students as they embark on a road trip for fun, fornication and recreational drug use, only for their plans to be foiled when they take an unexpected detour into a motel in the middle of nowhere. Soon their lives become a living hell as the monstrous janitor is on the loose, turning everyone he encounters into infected sexual deviants. Needless to say, chaos ensues – and there is not a single bodily fluid that isn’t on display at some point.

It takes a lot of smarts to make horror movies this intentionally stupid enjoyable. Anybody can set out to make gross-out, offensive films for the sake of eliciting shocks from the audience, and you see a lot of underground horror films which try too hard to achieve this, but end of failing because it’s been done before – and better. However, Night of Something Strange is – first and foremost – entertaining: While its content will undoubtedly offend and disgust some viewers, its main objective is to provide laughs, and in that regard, it succeeds. The hilarity is supplied in heaps throughout. Granted, the humour is as silly and juvenile as you’d expect from a film about randy, rampaging zombies with radioactive sperm; but part of the fun comes from watching it constantly outdo itself, scene after scene, and seeing what type of madness it will come up with next. On top of that, there is barely a taboo in the book that isn’t shattered with unapologetic glee. Politically incorrect? You bet. Mean spirited? Not at all.

Another positive (or negative, depending on your threshold) is that the gross-out gags are genuinely disgusting – and so they should be. Night of Something Strange offers some truly icky moments of body horror, and while it might put you off food for the foreseeable future, at least you’ll laugh your way to the sick bag. Scenes of uncomfortable sexual mishaps, extreme gore, cannibalism and an assortment of every nasty fluid the body can produce being drenched all over everyone in sight makes for some hilariously unpleasant viewing. 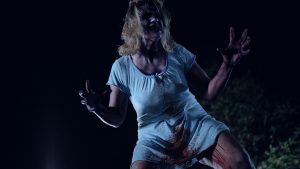 All in all, Night of Something Strange is a success. It’s a film that achieves everything it sets out to do and does so with style and competent craftsmanship. The production values are brilliant for a film this low budget, and its energy is – like the monsters on screen – infectious. It doesn’t quite hit the mark as highly as something like Peter Jackson’s Dead Alive, or even Eli Roth’s Cabin Fever (both of which it is reminiscent of at times). But if you’re a fan of either of those films, you’ll have a good time with Night of Something Strange. If it’s mindless, nauseating entertainment you’re after, you can do a lot worse than this movie.