An animated adaptation of George A. Romero’s 1968 horror classic Night of the Living Dead is shuffling our way—and the cover art has risen from the grave!

Called Night of the Animated Dead, the film retells the familiar story, adding exclusive animated scenes not seen in the live-action original. After siblings Barbara and Johnny are ambushed by zombies when visiting their father’s grave in Pennsylvania, Barbara takes refuge in an abandoned farmhouse alongside stranded motorist Ben and four local survivors. Now, the group must fight to stay alive, while confronting their own fears and prejudices.

Night of the Animated Dead was directed by Jason Axinn (To Your Last Death) and animated by Demente Animation Studio. The cast of voice actors includes Josh Duhamel (Jupiter’s Legacy) as Harry Cooper, Dulé Hill (Psych) as Ben, Katharine Isabelle (Ginger Snaps) as Barbara, James Roday Rodriquez (Psych) as Tom, Katee Sackhoff (Oculus) as Judy, Will Sasso (Drop Dead Gorgeous) as Sheriff McClelland, Jimmi Simpson (Unhinged) as Johnny, and Nancy Travis (So I Married an Axe Murderer) as Helen Cooper. The film will get a digital release on September 21st, before releasing as a DVD and Blu-ray Combo Pack on October 5th. 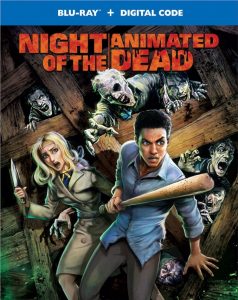