Another year, another Romero remake.

The latest take on the legendary director’s game-changing horror classic Night of the Living Dead comes from Rising Pulse Productions in affiliation with Mouse Nest Productions, and is titled Night of the Living Dead: Rebirth. Below is the first trailer for the film, and the big news is that it doesn’t look terrible. A teaser is not a lot to go on granted, but it hints at a rather nicely shot film with some heavy atmosphere and aesthetic nods to classic horror. This could be one to keep an eye out for. 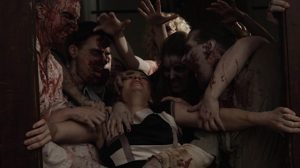 Synopsis:
What begins as an annual visit to their family grave-site quickly becomes a night of sheer terror as two brothers are unexpectedly forced to fight back against a sudden onslaught of violent assailants. Soon, eight complete strangers find themselves barricaded inside a rural farmhouse in an attempt to survive against the ever-growing army of murderous creatures outside.

1968’s Night of the Living Dead has already been remade several times in various forms, most notably (and most successfully) by Tom Savini in 1990.