THE NIGHT IT GOT OUT: Book Review

A top secret government project is being transported across country. During a heavy snowstorm in Colorado, a traffic accident involving the transport truck causes the release of a monster. Immediately, carnage ensues. The National Guard and FBI arrive on the scene along with local law enforcement. Unfortunately, the beast has escaped near the small town of Mangas Pass. The townsfolk are unprepared for what arrives.

It’s the age old tale of man messing with nature and paying the price. Rare creatures were bred in military captivity and enhanced for the purpose of hunting Viet Cong in Cambodian tunnels during the Vietnam war. This is the last surviving creature from that program. The recounting of the program, the training, and the early exploits before the creature went missing are some of the best parts of the story.

We follow a small town cop, Police Chief Girard, and Colonel Harmon who is charged with fixing the mess from the government’s standpoint. Harmon has overseen the creature program from the start and the creature’s relationship with him has an interesting dynamic. The beauty of such a small town is that everyone knows everyone, but that takes on a different feeling when all that is left of people you’ve known all your life is dismembered body parts. 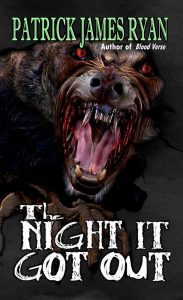 As for the creature itself, it is intelligent, reasons and plans, and is a purebred killer. In Mangas Pass it just goes for it on a rampage. It doesn’t hide, it doesn’t stick to the shadows, it kills and eviscerates with aplomb. There are plenty of grisly deaths to enjoy in this book as its powerful body, claws, and teeth are put to good use. As the story progresses a Delta team is brought in to try to stop the creature. The story is pretty straightforward and as such there aren’t too many surprises. There’s a bit of a Predator feel to things and a shopping mall provides a great urban jungle for a big face off.

There are plenty of positives about this book, but it didn’t quite work for me. The themes of a government that can’t be trusted and has ulterior motives is too expected. I felt like the story needed to be longer with more incidents and what I’d call set pieces, to show off the creature. The residents of Mangas Pass, aside from Girard, are little more than creature fodder, so I’d like to have had them more fleshed out, prior to them being literally fleshed out by the creature.