THE NIGHT EVELYN CAME OUT OF THE GRAVE 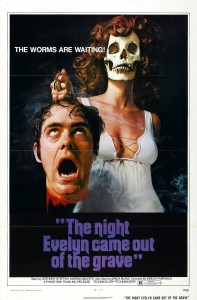 Released as part of a double disc box set from Arrow Video with The Lady in Red Kills Seven Times; this enthralling Italian thriller from 1971 marks a change from the gnarled, lurid film-making styles of Lenzi, Fulci and Sergio Martino. TNECOOTG is eloquently crafted with radiant visuals, brash fashions and characters more synonymous with the era in which the film was made and set, than the giallo genre’s per se. A sumptuous kitsch score by Bruno Nicolai (Your Vice is a Locked Room and Only I Have the Key) adorns TNECOOTG’s chic settings while affluent characters dot the plot in brassy attire. As well as an air of polish, TNECOOTG is embellished with scenes of ignoble horror which arise in the form of murder, medieval bondage and supernatural/ séance sequences, glossed with a gothic tenor that flatters the genre facets without totally drowning them out.

Steffen is amusing as Cunningham: gliding through gaudy soirees and dubious nightspots while spouting debonair blether like Roger Moore on roller-blades, as women deflate at his feet into subservient sexual wrecks. But the protagonist’s histrionic am-dram breakdowns render the horror partially defective as potential dramatic potency and plot/ character complexities aren’t efficiently extrapolated or utilised to affect. Alan escorts women (some prostitutes) back to his castle for agony antics before disposing of them accordingly. Oddly the protagonist isn’t portrayed as an explicitly evil monster or the central villain, despite his splintered/ dubious mind-set/ homicidal tendencies. Instead he appears as a complex, unhinged antihero/ victim of circumstance. This is a brave/ diverse move of Writer/ Director Emilio Maraglia but one that renders TNECOOTG slightly fright light and lacking an antagonist. 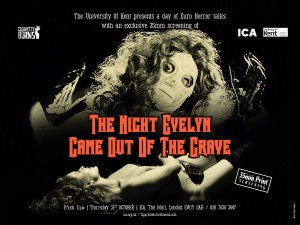 Maraglia’s film is unique and bracing in its ability to brazenly saunter to the outskirts of convention, defy expectation and occasionally unnerve despite its age. The story twists from a standard serial killer/ soft-core skin flick into a dark, pseudo-supernatural drama as Maraglia crafts a multifarious plot encompassing multiple genre facets which keeps the film feeling fresh: lacing erudition with decadence and dreamy visuals with grubby, attack/ seduction sequences in a dank BDSM dungeon. It’s few affective scares are subtle and arise in the form of a skull-faced spectre gliding from the shadows of a tomb/ or via flash cuts at a window while a scene featuring a skulk of foxes masticating on human intestines and the aforementioned medieval sex/ torture scenarios are a dying breath from deplorable.

Several supporting characters are introduced, some of which are superfluous while others enrich the story and inform the protagonist’s social status.  Background players drive the plot, particularly in the second half which sees Alan break down after participating in a family séance. Alan then relocates to the city to escape his bad memories. Once there, he meets and falls in love with exotic dancer Gladys (Marina Malfatti) and their budding relationship governs the film’s second half.  The story then once again swerves, this time into romance, before veering brusquely into a murky Les Diabolique-like mystery for the gothic, grand finale. A hack pool-side punch up proves amusing but perfunctory before TNECOOTG abruptly ends on a distorted, colourised freeze frame. While it’s far from a masterpiece, Maraglia’s giallo is alluring, opaque and unified with some unforgettable sequences that boom amongst the surplus without feeling jarringly crow-barred in to bide time between plot points. TNECOOTG glides without reverberating but it’s a cracked and curious genre trinket that giallo fans should admire. 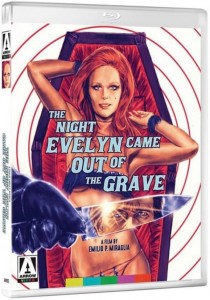 Extras include: an intro by supporting actress Erika Blanc, who plays Alan’s victim Suzie (this contains spoilers so avoid if you have never seen the film before). Also included is a brilliant critique from Stephen Thrower, “Remembering Evelyn”, directed by Jake West. This mini-analysis reveals some fascinating facts about the film and its production, i.e. how TNECOOTG was originally received upon its initial release in America, its misinterpretation of British fox hunting (Anderson keeps foxes in his cages at his castle for some reason) and how TNECOOTG is set in England but clearly filmed in Italy (all the car’s are left hand drives and the castle architecture is clearly Italian).

“The Night Erika Came Out Of The Grave” is an interview with Erika Banc. Blanc recalls her memories of the production, choreographing the coffin dance, working with lead actor Anthony Steffen (“a vain ex-boxer”) and how she enjoyed being whipped on screen. Also included are a selection of “Archival Special Features” including another brief 2006 interview with Erika Blanc. A short film called “The Whip and the Body” which has Blanc (again) recounting her memories and a short entitled “Still Rising from the Grave”: an interview with Art Director/ Costume Designer Lorenzo Baraldi who discusses his career, how he started in the industry and his memories of the production. The disc also contains Italian and English trailers which are basically the same apart from the credit text and dialogue.