Nicolas Cage has quite the career in horror films, having starred in The Wicker Man – ouch! – Knowing – sort of horror, not particularly great – and Pay The Ghost – quite awful. So, it seems like he’s still yet to feature in a decent one. Do correct me if I’m wrong. He’s not giving up on the genre just yet, because he’s now signed on to star in a new horror-thriller called Looking Glass from first-time director Dori Oskowitz. 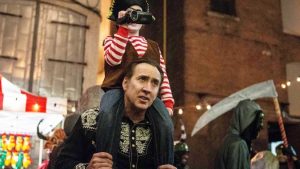 Looking Glass will follow a grieving couple in a recently purchased motel, discovering that the rooms are home to disturbing events. It sounds like Pay The Ghost meets The Shining and 1408; which we think could leave a lot of space for Cage to go expectedly crazy. Either that, or he’s going to venture into Wonderland.

Looking Glass comes from a script written by Jerry Rapp and Matthew Wilder and will be produced by Braxton Pope.