Nicholas Hoult Loses it in the Trailer for Kill Your Friends

Based on the satirical novel by John Niven, Kill Your Friends is a black comedy-thriller which follows Steven Stelfox (Nicholas Hoult) who will stop at nothing – literally – to further his career in the music industry. 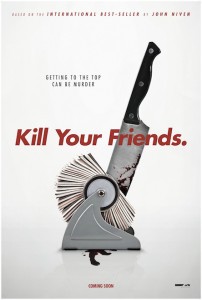 Nicholas Hoult has already proved he can do ‘crazy’ in Mad Max: Fury Road, so I guess he just has to ramp it up a little bit for Kill Your Friends. Take a look at the trailer below; it looks like a cross between American Psycho and Horrible Bosses, but can Steven Stelfox be the new Patrick Bateman?

Kill Your Friends will be released in the UK on 6th November 2015.