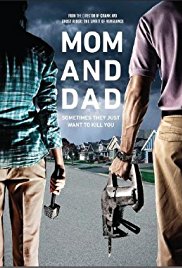 Following its Toronto International Film Festival premiere, parents-gone-wrong shocker Mom and Dad has been picked up by Momentum Pictures, who will release the film in US theaters and VOD platforms on January 19th, 2018.

The film centres around teenager Carly (Anne Winters) and her younger brother Josh (Zackary Arthur) who must try to survive the toughest 24 hours of their lives, when a mysterious mass hysteria causes parents to turn violently on their own children.

The crazed parents are played by Selma Blair (Hellboy, WΔZ) and Academy Award winner Nicolas Cage and one has to think they’re gonna be pretty great in these roles. No one does boggle-eyed crazy like Cage. Also appearing is prolific genre veteran Lance Henriksen (Aliens, The Terminator, Near Dark). Crank director Brian Taylor wrote and directed the film, reteaming with Cage having helmed Ghost Rider: Spirit of Vengeance in 2011.

Expect a trailer sometime in the next few weeks.