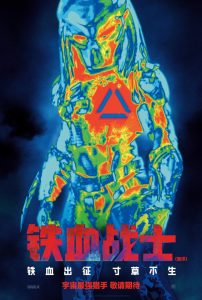 “This year’s Midnight Madness slate promises another idiosyncratic confluence of established and emerging genre filmmakers. To complement some of the buzziest provocations on the festival circuit, I have sought to curate an eccentric array of World Premieres that demonstrate the dexterity of genre cinema as a canvas for both sublime satisfaction and stunning subversion. That includes the section’s two much-anticipated sequels, The Predator and Halloween, each of which boldly and brilliantly builds upon its mythic iconography to thrilling and surprising effect.”

The announcement coincides with the release of a new TV spot for The Predator, both of which feature the intergalactic game hunters’ signature thermal vision. Give it a look-see below.