Freestyle Digital Media has put out a stylish trailer for gothic ghost story Angelica, which sees director Mitchell Lichtenstein returning to the horror realm for the first time since his 2007 feature debut Teeth. 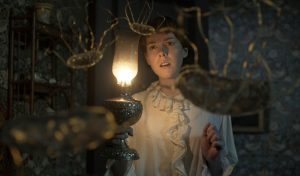 Jena Malone (Sucker Punch, The Hunger Games), two-time Academy Award nominee Janet McTeer (The Woman in Black, Albert Nobbs) and Ed Stoppard (The Pianist) star in the film, which is based on Arthur Phillips’ novel. Set in Victorian London, it sees newly-married Constance (Malone) and Joseph (Stoppard) suffering a series of increasingly troubling psychological and supernatural disturbances following the birth of their child, Angelica.

Lichtenstein reunited with his Teeth producer Joyce Pierpoline for Angelica, which had its world premiere all the way back in 2015 at the Berlin Film Festival. The film finally sees wider release on November 17th, when it hits VOD and selected US cinemas.