There are gruesome moments and neat visuals aplenty in this new trailer for horror anthology Dead List, which comes to VOD in May.

The film tells five separate tales of actors meeting supernatural ends after a fellow performer conjures up a malevolent force to wipe out his competition. The film’s various segments were written and directed by Holden Andrews, Ivan Asen and Victor Mathieu.

Synopsis:
Calvin is competing with five other actors — Zander, Scott, Kush, Jason and Bob — for a major movie role. Stopping at nothing to win the role of a lifetime, he uses a demonic book to curse his fellow actors, with each actor being killed off in their own separate unique and terrifying chapter. 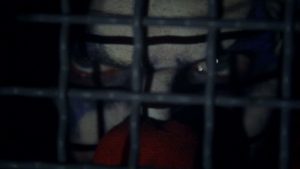 Matt Fowler, Nick Bandera, Deane Sullivan and Rob Healy star in Dead List, which premieres on VOD on May 1st and DVD July 3rd, from High Octane Pictures. The trailer throws up several cool moments, suggesting this could be a cut above your average low budget horror anthology.