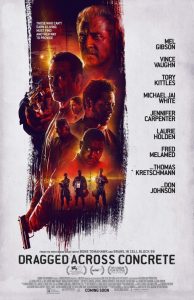 A brand new trailer has been released for S. Craig Zahler’s new feature Dragged Across Concrete and, despite the aggressive title, the trailer doesn’t showcase much of the violence. Coming from the writer-director of Bone Tomahawk and Brawl in Cell Block 9, however, we’re expecting something that packs a punch.

Synopsis:
Once two overzealous cops get suspended from the force, they must delve into the criminal underworld to get their just due.

Check out the trailer below and be sure to check out Dragged Across Concrete on 22nd March 2019.