New Trailer for Body Gets Ready to Party 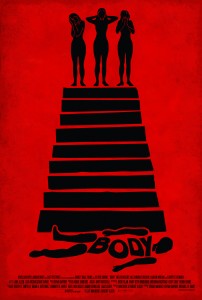 A new trailer for the FrightFest hit Body has been released to celebrate the film’s upcoming release in the USA. The trailer is stylish and wicked as it shows a harmless bit of fun turning in to something a lot less hilarious as the girls fatally knock a man down the stairs. Set to the tune of chilling classic music, the girls battle to stay sane and out of jail.

Synopsis:
An idyllic Christmas holiday turns deadly when best friends Holly, Cali and Mel break into a local mansion they believe to be unoccupied. But they quickly realise they’re not alone in the house and in a moment of panic become embroiled in a grisly murder. The three girls self-destruct as they try and figure out what to do with the dead body in the living room.

Body comes from directors Dan Berk and Robert Olsen, marking their feature film debut. It stars Helen Rogers, Alexandra Turshen, Lauren Molina and Larry Fasenden. Check out the trailer below; it shows a Christmas celebration taking one hell of a dark turn.

Body is out now on DVD in the UK and the film opens in the USA on 11th December and on-demand on 29th December 2015. Perhaps it will be your new favourite festive film!