New Trailer for Astron-6’s The Editor 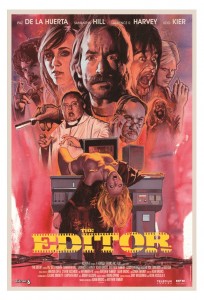 There is a new trailer for the brilliantly crazy Astron-6’s latest barmy endeavour The Editor. A homage to Italian giallo cinema, The Editor is a bloody, fun and hilarious addition to the filmmakers’ collection. If you are familiar with their work – which I imagine you are, you’ll know they are famous for cult masterpieces like Manborg and Father’s Day. So, you know exactly what kind of mental to expect from The Editor.

Check out the trailer below, it’s as absurd and trashy as can be, so fans of Astron-6 should be in heaven.

Synopsis:
Rey Ciso (Adam Brooks) was once the greatest editor the world had ever seen. Since a horrific accident left him with four wooden fingers on his right hand, he’s had to resort to cutting pulp films and trash pictures. When the lead actors from the film he’s been editing turn up murdered at the studio, Rey is fingered as the number one suspect. The bodies continue to pile up in this absurdist giallo-thriller as Rey struggles to prove his innocence and learn the sinister truth lurking behind the scenes.

The Editor will be released on Blu-ray and DVD in the USA on 8th September 2015. Keep an eye out for that UK release date we are all hoping for!