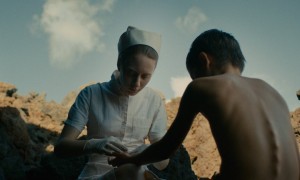 An extremely eerie and unsettling trailer has been revealed for Evolution, the French horror mystery from Lucile Hadzihalilovich (Innocence). It looks like a remarkably dark feature that could rival The Witch and Goodnight Mommy for the creation of the creepiest atmosphere. Much like those two, Evolution relies on a build-up of mystery and intrigue to garner attention and we think it works wonderfully.

Synopsis:
10-year-old Nicolas lives with his mother in a village on a remote island inhabited solely by women and young boys. In a hospital overlooking the ocean, all the boys are subjected to a mysterious medical treatment. Only Nicolas questions what is happening around him. He senses that his mother is lying to him, and is determined to find out what she does with the other women at night, on the beach. What he discovers is the beginning of a nightmare into which he is helplessly drawn.

Check out the ominous trailer below, which is filled with moments to make you squirm and a creeping sense of dread, as well as plenty of beautiful cinematography and a stunning, yet sinister, soundtrack. We love it.

Evolution will be released through Metrodome in the UK on 22nd June 2016.