With undeniable shades of Rosemary’s Baby, maternal shocker Shelley is on its way thanks to those horror-loving fiends at IFC Midnight. Ahead of its July release comes a new trailer, not to mention this beautifully conceived poster. 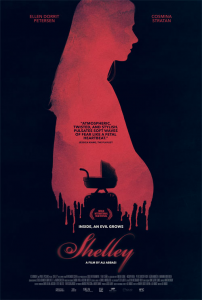 Shelley is the spawn of director Ali Abbasi, making his feature debut. It stars Ellen Dorrit Petersen and Peter Christoffersen as a couple who are unable to conceive, and so pay their maid (Cosmina Stratan) for a little womb room in which to grow themselves a little ‘un.

An unholy force takes root in an expectant mother’s womb in this eerie, dread-inducing shocker. Privileged, nouveau-eco-hippies Louise and Kasper live off the grid in a remote home in the woods. Unable to conceive, the couple arranges for their immigrant maid, Elena, to act as a surrogate mother in exchange for payment. But as Elena becomes mysteriously sicker with each passing day, fears mount about what may be growing inside her.

A Denmark/Sweden co-production, Shelley is released in selected US cinemas and VOD on July 29th.