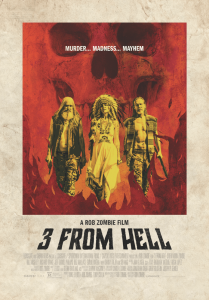 The poster also makes it clear that Richard Brake (31, Hannibal Rising) is one of the titular three, alongside Sheri Moon Zombie’s Baby and Bill Moseley’s Otis. Brake will play a new character called Foxy. While Sid Haig will be reprising his role as Captain Spaulding, it seems like he may have a smaller role.

Taking place after the events of The Devil’s Rejects, Three From Hell sees Otis, Baby, and Spaulding imprisoned after their “satanic recovery.” But the three inevitably escape and set out to unleash those three M’s on the world.

Three From Hell will be released in nearly 900 select movie theatres on September 16th, 17th, and 18th through Fathom’s Broadcast Network.