Two new posters have arrived for James Wan’s upcoming The Conjuring 2, which will arrive this summer, to no-doubt packed auditoriums. The posters lay focus on paranormal investigators The Warrens, one showing Vera Farmiga’s Lorraine Warren afraid and backed against a wall as a shadowy hand reaches for her. In the other, Ed Warren (Patrick Wilson looking, it must be said, not entirely dissimilar to Liam Neeson) holds a crucifix up to an unseen entity. 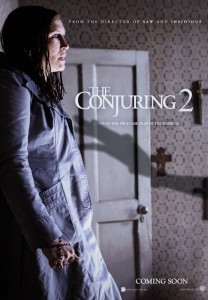 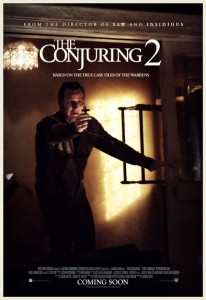 Centring on the infamous ‘Enfield Poltergeist’ case detailed in last year’s miniseries The Enfield Haunting, word is that The Conjuring 2 also touches upon spooky events occurring at a certain house in the Long Island town of Amityville, before moving the action to England.

As well as casting striking images, the posters state that the film is ‘Based on the true case files of the Warrens’. It’s difficult not to feel that this hints at the possibility of any number of further films in the series, each based on a different file. Indeed, maybe even a TV series. Let us not get ahead of ourselves though, we’ve still got a while to wait before The Conjuring 2 hits cinemas on June 10th (US), and June 17th (UK).

As well as returning to direct, James Wan wrote the film together with The Conjuring scripters Chad and Carey Hayes, and David Leslie Johnson (Orphan).