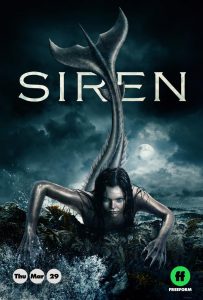 A new teaser and poster have arrived for Freeform’s upcoming series Siren and it shows the horrifying beauty of a mysterious girl from the ocean.

We all know the folklore tale associate with the sirens; they lured sailors to their deaths with their beauty and enchanting singing voices – but Freeform’s series will bring the series to modern day. In the series, Ben (Alex Roe) is drawn to an enigmatic, strong and murderous woman who is harbouring a sinister secret.

It’s been a long while since we’ve seen a series centred on mermaids in a coastal town, so we hope the series will be as mysterious and chilling as the Siren it centres on.

Based on the story by Eric Wald and Dean White, Siren will have its 2-hour premiere on 29th March. The series additionally stars Eline Powell as Ryn – the woman with the dark secret, Fola Evans-Akingbola and Rena Owen.