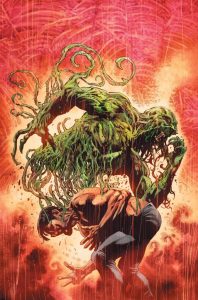 DC Comics is bringing Swamp Thing out of the swamp and back onto the page with a brand new comic series launching in March of next year.

“The word’s out!” writer Ram V shared on Twitter. “I’m writing a new Swamp Thing series @dccomics in 2021 with Mike Perkins on art, @SpicerColor on colours and @adityab on letters. An absolute pleasure to say #SwampThing #1 drops in March.”

This will follow the release of Future State: Swamp Thing, which launches in January 2021. While you won’t need to read the two-issue Future State series to enjoy the upcoming series, Ram V teases “there are hints and clues in future state about this series and where it’s going.”