More New It Stills Floating In

Still more images from It keep coming in, with the latest two courtesy of Entertainment Weekly. One shows the seven members of The Losers’ Club, presumably as they close in on Pennywise for what will undoubtedly be the film’s climactic battle, which takes place deep in the sewers. The other is another shot of Bill Skarsgård as Bob Gray, aka Pennywise the Dancing Clown. 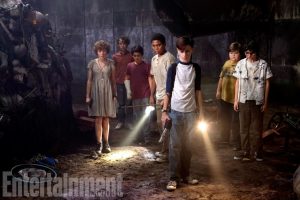 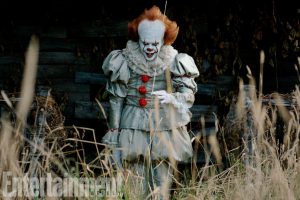 Director Andrés Muschietti talked to EW about the film’s shapeshifting monster, saying: “He is present. It’s not like one of those movies where you can hide the monster. He’s front and center, he does his show, and he has an act. He is a clown.”

Explaining his approach to bringing Pennywise to life, Muschietti says: “Keep it weird. It’s weird all the time. Pennywise does things that make absolutely no sense, but they’re very disturbing because of the weirdness. What’s funny to this evil entity might not be funny to everyone else. But he thinks it’s funny.”

It, or, It Part 1 – The Losers’ Club stars Jaeden Lieberher, Sophia Lillis, Jack Dylan Grazer, Wyatt Oleff, Chosen Jacobs, Jeremy Ray Taylor and Finn Wolfhard as the young members of The Losers’ Club. It will float into cinemas on September 8th.

Various recent trailers suggest a far richer, more faithful adaptation of Stephen King’s expansive novel than the half-baked 1990 miniseries, and hopes, it is fair to say, are high.