We’ve got a new image to share with you from Matt Bettinelli-Olpin and Tyler Gillett’s upcoming Scream film, and Dewey Riley (David Arquette) appears to be on the hunt for Ghostface! Alongside him, you’ll see Melissa Barrera’s new character, Sam, who is being targeted by the killer and turns to Dewey for help. 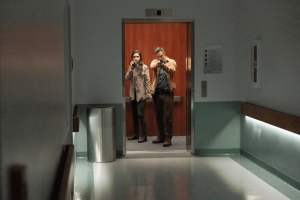