A new poster has been unveiled for the sci-fi adventure sequel Beyond Skyline and it shows the alien threat and the heroes hired to take them down. With the Purge’s Frank Grillo and The Raid’s Iko Uwais hot on their tail, we’re sure the extra-terrestrial invaders don’t stand a chance. 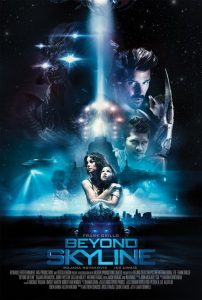 Synopsis:
A tough-as-nails detective embarks on a relentless pursuit to free his son from a nightmarish alien warship.

Skyline was super average, but the cast and intriguing premise have piqued our interest for Beyond Skyline. Sure, having the director of Alien vs Predator: Requiem at the helm doesn’t sound too promising, but from the trailer, there looks to be some decent special effects in there.

There is currently no release date set for Beyond Skyline. Uh oh.