Emma Berquist’s zombie western novel Devils Unto Dust is not due for release until April, but has already been picked up for a feature adaptation by New Regency, who announced their acquisition on Monday.

The news was broken by Tracking Board, who said that the tale has been described as “…a cross between True Grit and 28 Days Later,” and detailed the plot as follows: 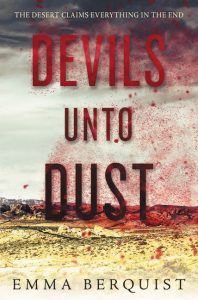 Devils Unto Dust tells the story of 17-year-old Daisy Wilcox and her journey through West Texas in the 1870s — a Reconstruction period plagued by a deadly virus infecting thousands with a rabies-like disease that turns people into murderous “Shakes.” When Daisy’s father disappears, she hires two Shake-hunters who specialise in killing the infected, and sets off into the terrorscape of the western frontier to find him.

New Regency’s Arnon Milchan will produce the film alongside Nira Park of Big Talk Pictures. Big Talk’s Rachael Prior will executive produce. Sam Hanson will oversee the project for New Regency, while HarperCollins will publish the novel under its Greenwillow imprint in April 2018.