After November’s trailer and a number of stills, it’s still difficult to know exactly what to expect from Rampage, which is not far away now, opening in cinemas on April 20th. This new trailer proves quite fun, teasing a lot more humour than previously suggested which, given the film features a giant gorilla, an equally-oversized lizard, a flying mutant wolf and Dwayne Johnson, is definitely reassuring. 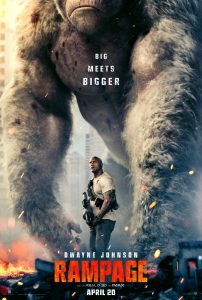