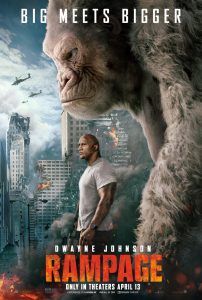 The promotional push for Rampage steamrolls on, with the latest poster lining up The Rock with his giant monkey pal George, as the city burns behind them. Basically, it’s entirely in keeping with what we’ve seen thus far and, with the film’s release still a month off, probably won’t be the last one sheet to come our way.

Rampage smashes its way into cinemas on April 13th.