A new poster has been unveiled for the German-Austrian folklore horror Hagzussa: A Heather’s Curse and it’s a beautifully terrifying work of art. It perfectly encapsulates the film’s folklore, superstition and pagan focus. 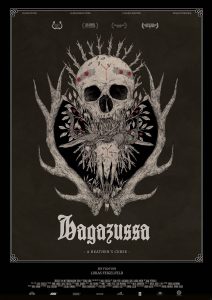 Synopsis:
Set in the 15th Century in the Austrian Alps, Hagazussa takes us back to a dark period when pagan beliefs of witches spread fear into the minds of the rural folk exploring the thin line between ancient beliefs, magic, and delusional psychosis.

Hagazussa comes from director Lukas Feigelseld who previously directed the short film Interferenz. Hagazussa stars Haymon Maria Buttinger, Aleksandra Cwen and Claudia Martini. It sounds like the film is going to be a blend of the fantastique and horror, so expect genre-bending thrills and hopefully plenty of frights.

Hagazussa is set to premiere at Fantastic Fest which runs from 21st to 28th September, before hitting the London Film Festival on 8th October.