The New Poster for Riot Girls Makes a Splash

A new poster for Jovanka Vuckovic’s Riot Girls has been unveiled and it embodies the film’s punk rock side with a splash of colour. The film has been described as mixing a post-apocalyptic tale with survivalist horror, throwing in a side of queer romance and some adventure for good measure. 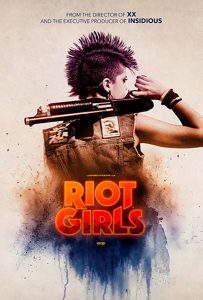 Vuckovic’s ‘The Box’ segment from last year’s anthology horror XX was my personal favourite. It combined mystery and horror in an unforgettably unnerving manner. Despite the title, it certainly did not tie up the events in a neat little bow, ensuring that the story lingered long after the closing credits.

Check out the EFM sales art poster for Riot Girls below and hopefully the film will hit the festival circuit this year.