New Poster for Rings has an Evil Dead Vibe

A new poster has been unveiled for the upcoming sequel Rings, which sees Samara continuing to terrorise those who watch her cursed videotape. This time, the horror takes to new heights and sees the video spread at breakneck speed.

Synopsis:
A young woman becomes worried about her boyfriend when he explores a dark subculture surrounding a mysterious videotape said to kill the watcher seven days after he has viewed it. She sacrifices herself to save her boyfriend and in doing so makes a horrifying discovery: there is a “movie within the movie” that no one has ever seen before… 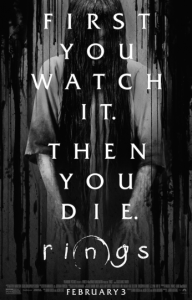 The new poster seems to have taken a leaf out of Fede Alvarez’s Evil Dead book – or Necronomicon – as it embodies the same huge font over a terrifying figure that was used for the aforementioned remake. This time, however, the poster is black and white and, arguably, all the more frightening for it. Instead of the figure of a woman possessed, this one shows Samara looking as chilling as ever. She warns: First You Watch and Then You Die. It’s a blunt and sinister caption that sums up the horrifying mythology we first encountered in Japan’s 1999 modern classic Ringu.

We’re excited to see a new addition to the Ring franchise and it seems as though this one is taking a refreshing approach to the tale.

Rings comes from director F. Javier Gutierrez (Before the Fall) and will be released in the UK and USA on 3rd February 2017.