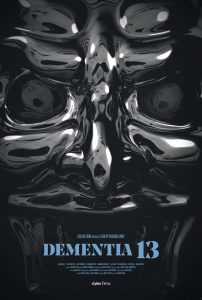 Francis Ford Coppola’s 1963 whodunnit-horror Dementia 13 is getting the remake treatment and we have the first poster to share with you. The new poster doesn’t tease much in terms of the story, but simply and effectively teases the mask of mystery that will dominate the film.

In Dementia 13:
A vengeful ghost, a mysterious killer, and a family where everyone has a secret converge in one night of terror.

Dementia 13 will be directed by Richard LeMay (Whirlwind, Naked As We Came) and stars Julia Campanelli, Channing Pickett, Steve Polites and Marianne Noscheze. The script comes from co-writers Dan DeFilippo and Justin Smith, who are both making their scriptwriting debut.

Dementia 13 will be released in select cinemas on 6th October, before being released on VOD and Digital HD on 10th October 2017.