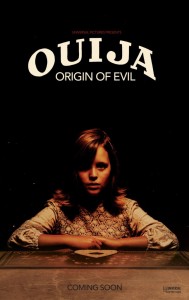 I wasn’t blown away by Ouija, but I far from hated it, so I’m looking forward to the film’s sequel Ouija: Origin of Evil. Plus, the mighty Mike Flanagan (Absentia, Oculus, Hush) is directing, so it has to be ace. Right?

Have a gander at the new poster which won’t blow your mind, but it does well at channelling an old-school horror feel with its earthy colours and eerie lighting. The ominous glare from the girl is also suitably spooky; I swear she’s staring directly into my soul.

Not a lot is known about the direction the film will take and there are still no official words on the plot or characters. We do know what Sam Anderson, Kate Siegel, Doug Jones, Elizabeth Reaser, Henry Thomas and Lulu Wilson are starring, and Ouija: Origin of Evil will hit cinemas in the USA and the UK on October 21st. Just in time for Halloween, perfect.