New Poster for Living Among Us Shows Extraordinary Neighbour

A new poster has been unveiled for the faux documentary Living Among Us and it shows a woman who is no ordinary neighbour. She’s a vampire! 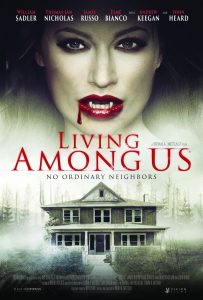 Living Among Us follows a documentary crew who spend time with a family of vampires and, as the trailer has shown, it doesn’t go quite as planned. Who’d have thought it? Remind yourself of the bloody and monstrous trailer below.

Synopsis:
Living Among Us follows a documentary crew sent in to interview a family of vampires whose existence has been made known to the world. But soon, the crew realizes their very lives are in danger as they uncover a deadly secret and must fight for survival.

Originally completed in 2013, Living Among Us will be released on VOD in the USA in January of next year. The film stars William Sadler, John Heard, James Russo, Esme Bianco, Andrew Keegan and Thomas Ian Nicholas. That’s one exciting cast.