A brand new poster has been revealed for The Meg and it shows Jason Statham face-to-face with the mighty megaladon. Despite the Meg looking so damn huge, we all know that he’s going to be no match for the mightier Statham. Right? 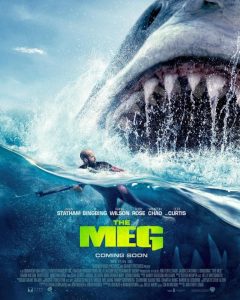 Starring Jason Statham, Ruby Rose, Rainn Wilson and Bingbing Li, The Meg follows Jonas Taylor (Statham) as he tries to save the crew of a submersible from a 70-foot prehistoric shark.

Remind yourself of the epic and exciting trailer below. The film’s combination of fun and fear looks super appealing, so we’re definitely going to be there when The Meg sails into cinemas this summer.

The Meg will be released on 10th August 2018. I wonder if anyone has cancelled their trip to the beach.