New Poster for The Boy Just Wants to Feel Love 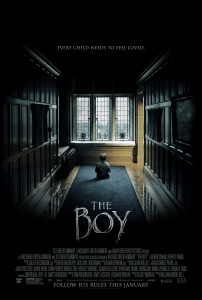 We recently showed you the first trailer for The Boy, which surged to almost 18 million views across social media platforms just days after its release. We all love a good spooky doll flick and The Boy looks like someone who can definitely give Annabelle and Chucky a run for their money. Remind yourself of the chilling trailer here.

We now have a new poster to share with you and it’s as creepy as the trailer as it urges us to let the boy feel loved. Despite him not being, well, a real boy. It beautifully captures the distinctive and ominous atmosphere from the trailer in a gorgeously dark and simple snapshot. It’s very eerie and definitely gets us intrigued for the film.

The Boy stars Lauren Cohan (The Walking Dead) Jim Norton and Diana Hardcastle and comes from director William Brent Bell (The Devil Inside, Wer). The script has been written by Stacey Menear (Mixtape).