New Poster for The 5th Wave Shows Us the Aliens’ Destruction 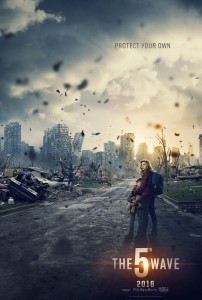 In The 5th Wave Chloe Grace Moretz prepares for an imminent and ominous attack from extraterrestrials and the new poster gives us a look at the destruction that has, so far, been wreaked. The poster encourages us to ‘protect our own’ and that is exactly what Moretz’s character Cassie is doing as she holds her brother close to her.

Synopsis:
The thriller centres on 16-year-old Cassie (Moretz), who’s on the run after four waves of increasingly deadly attacks that have left most of Earth decimated. Against a backdrop of fear and distrust, Cassie is on the run, desperately trying to save her younger brother. As she prepares for the inevitable and lethal fifth wave, she meets a young man who may become her final hope.

You can check out the trailer for The 5th Wave below and see the four waves of alien terror that have reduced the earth to a shell of its former self. It looks tense and very exciting as it incorporates elements of drama, science-fiction and horror. The tone feels a lot like a cross between Invasion of the Body Snatchers and The Thing, with a dash of Independence Day. I’m definitely intrigued.

The 5th Wave comes from director J Blakeson (The Disappearance of Alice Creed) and will hit US cinemas on 15th January 2016 and the UK on 22nd January 2016.