New Poster for The 5th Wave Questions Our Survival 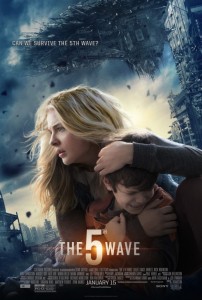 A new poster has been released for the upcoming alien-invasion thriller The 5th Wave and it questions whether we will be able to survive a deadly fifth attack. If you’ve read the novel this film is based on then you’ll know if we do, however, no spoilers please.

The poster shows leading lady Chloe Grace Moretz gripping tightly to her younger brother, who she is desperately trying to protect from the next wave of alien attacks. An alien spaceship looms ominously in the background, but there is a light within the destruction that hints at that happy ending we’re all rooting for.

Synopsis:
The thriller centres on 16-year-old Cassie (Moretz), who’s on the run after five waves of increasingly deadly attacks that have left most of Earth decimated. Against a backdrop of fear and distrust, Cassie is on the run, desperately trying to save her younger brother. As she prepares for the inevitable and lethal fifth wave, she meets a young man who may become her final hope.