A new poster has been unveiled for the sci-fi-actioner Mad Genius and it shows a young man who must hack the human mind to save the world. Unfortunately, it’s not as easy as it sounds, and he must first destroy his various alter egos. One, in particular, is going to be tricky because he will do anything to survive and accomplish their mission. 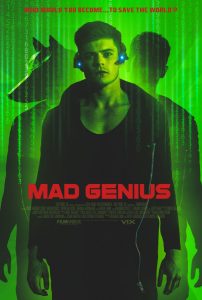 It sounds like it’s going to be a fun ride. It’s probably not going to be the scariest film of the year, but we’re expecting the concept alone to open the door to terrifying possibilities. Mad Genius has been described as Mr Robot meets The Matrix, and we’d throw in Black Mirror in there for good measure.

Mad Genius comes from director Royce Gorsuch (Another Man’s Shoes) and stars Spencer Locke, Farin Tahir and Scott Mechlowicz. The film will be out on VOD and On Demand from 3rd July 2018.