New Poster for Re-Release of Steve Alten’s The Meg

To celebrate the 20-year anniversary of Steve Alten’s The Meg, the book is being re-released with a brand new cover and we have a poster for the release to share with you. Check it out below, I’m sure it depicts many of our readers’ greatest fears as a mega shark swims towards a group chilling in the ocean. They’re reading The Meg, of course. 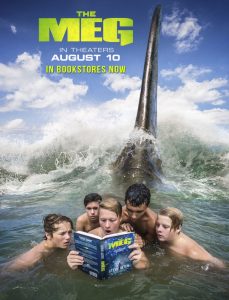 Synopsis:
On a top-secret dive into the Pacific Ocean’s deepest canyon, Jonas Taylor found himself face-to-face with the largest and most ferocious predator in the history of the animal kingdom. The sole survivor of the mission, Taylor is haunted by what he’s sure he saw but still can’t prove exists–Carcharodon megalodon, the massive mother of the great white shark. The average prehistoric Meg weighs in at twenty tons and could tear apart a Tyrannosaurus rex in seconds.

Jon Turteltaub is at the helm of an action-packed adaptation of the book which stars Jason Statham, Ruby Rose and Rainn Wilson. The film will be released on 10th August 2018, make sure it doesn’t scare you silly and prevent you from enjoying your, probably, much-needed summer holiday.