Hulu has shared the official poster art for its upcoming feature film adaptation of Clive Barker’s Books of Blood, and it perfectly sets the tone. 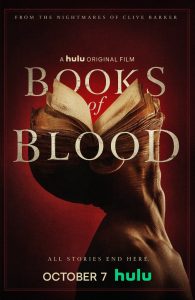 Directed by Brannon Braga (The Orville), the anthology film is based on a short story by Barker, with contributing original material, and takes a journey into uncharted and forbidden territory through three tales tangled in space and time.

Books of Blood will premiere on October 7th.