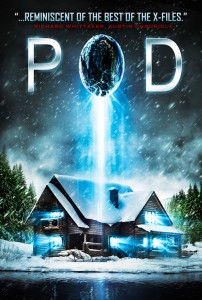 Is it a bird? Is it a plane? Probably not, but whatever Martin is hiding in his basement is about to cause some trouble.  A new poster for X-Files-esque thriller Pod has been revealed and it shows a cabin in a bit of bother. Snow is falling from the sky, suggesting the characters are going to be trapped, and whatever entity they’re trapped with is causing blue light to glare through the windows.

Synopsis:
After receiving a troubling voicemail, estranged siblings Ed and Lyla (Dean Cates and Lauren Ashley Carter) travel to their isolated family lake house in Maine to hold an intervention on their increasingly paranoid, war veteran brother, Martin (Brian Morvant). But the situation rapidly spirals out of control when they discover the house completely ransacked and learn that Martin has constructed an elaborate and horrifying conspiracy theory surrounding a sinister entity that he believes he has trapped in the basement.

I’m guessing the guy’s trapped an alien. Martin basically spells, Martian so there’s the evidence. I imagine Pod is going to be a bit like Ejecta, which has a similar premise and follows a man who believes aliens have landed in the woods near his home. I like Pod’s intention to create a sense of claustrophobia and inability to escape and a snowy setting is always quite ominous; think The Thing.

Mickey Keating (Ritual) is the writer and director behind Pod, and it Pod recently screened at the SXSW festival. You can check out the trailer below. It looks visually impressive and very fast-paced; with a short and sweet 76-minute runtime I imagine it’s going to be full-steam ahead with this one.

Pod will be receiving a theatrical release on 28th August 2015.